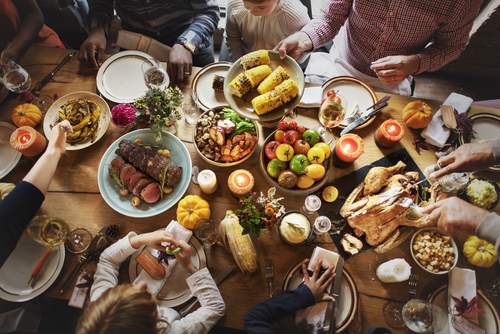 Thanksgiving Day  is a national holiday in the United States, and Thanksgiving 2022 occurs on Thursday, November 24th.  The history of this holiday begins in 1621, where the Plymouth colonists and the Wampanoag people shared an Autumn harvest feast . This event is considered to be one of the first Thanksgiving celebrations of the colonies. For more than two centuries, days of thanksgiving were celebrated by individual colonies and states.  Finally, while in the midst of the Civil War in 1863, President Lincoln proclaimed a national Thanksgiving Day to be held each November.

While no record exists of the first Thanksgiving menu, a Pilgram chronicler Edward Winslow  wrote the following: “Our harvest being gotten in, our governor sent four men on fowling, that so we might after a special manner rejoice together, after we had gathered the fruits of our labor; they four in one day killed as much foul, as with a little help beside, served the Company almost a week, at which time amongst other recreations, we exercised our arms, many of the Indians coming amongst us, and amongst the rest their greatest king Massasoit, which some ninety men, whom for three days entertained and feasted, and they went out and killed five deer, which they brought to the plantation and bestowed on our Governor, and upon the Captain and others. And although it be not always so plentiful, as it was at the time with us, yet by the goodness of God, we are so far from want, that we often wish you partakers of our plenty.”

Historians have made some suggestions that many of the dishes were prepared using traditional Native American spices and cooking methods.  Due to the Pilgrams having no modern day cooking appliances, and the Mayflower’s sugar supply was depleted by the fall of 1621, the meal would not have included desserts such as pies or cakes which are hallmarks of contemporary Thanksgiving dinners.

Today, nearly 90 percent of Americans eat  turkey, whether roasted, baked or deep fried and feast on other traditional foods including stuffing, mashed potatoes, cranberry sauce and pumpkin pie.  It has also been  a modern day tradition to volunteer for various community food kitchens, host free dinners, and collect food donations for less fortunate. Families and friends gather to enjoy parades and sentiments, many honoring the original religious significance of Thanksgiving.

Everyone at PHA wishes you a warm and satisfying Thanksgiving with all of your friends and family!

Thanksgiving Day  is a national holiday in the United States, and Thanksgiving 2022 occurs on Thurs... more