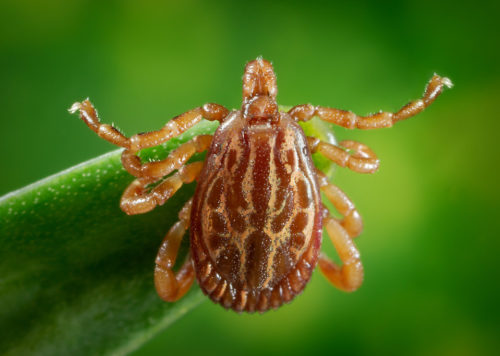 Most people are familiar with Lyme disease as one of the most common tick-borne illnesses in the United States. However, there are several other illnesses that can be transmitted to humans by ticks. One potentially deadly tick-borne illness is Powassan virus, which although rare, the number of reported cases has increased in recent years. 33 severe cases of Powassan virus were reported in 2017, which compared to the 2 reported cases in 2008 is an alarming increase.

Powassan virus is spread to humans through the saliva of an infected tick. It is particularly insidious because there are very few symptoms, no cure, and many infected patients require hospitalization. The best preventative measures are by avoiding contact with ticks to decrease your chances of becoming infected.

Powassan virus attacks the central nervous system. Although many people do not exhibit any symptoms while the virus incubates, some symptoms of altered brain function include

There are currently no medications or vaccines for Powassan virus. People that are severely infected and are exhibiting symptoms must be evaluated by a healthcare professional and may need to be hospitalized. Treatment in the hospital may include intravenous fluids, medications to reduce swelling in the brain, and respiratory support.

Prevention is the best way to avoid infection.

Avoid walking through grassy, wooded areas, especially in the spring and early summer. If you must be in these areas, always check yourself for ticks afterwards. Some important places to check for ticks are

It is also important to check your pets regularly for ticks, as Powassan virus-carrying ticks can be found on pets, and later bite the owner.

For frequently asked questions about Powassan virus, please refer to the Center for Disease Control and Prevention’s webpage.

The Dangers of Lyme Disease Not Just Lyme: Anaplasmosis

Prioritize Sleep Aim to sleep 7-9 hours a night. It is recommended to keep your bedroom as dark a... more