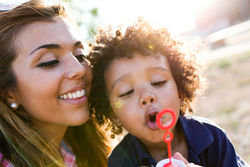 After the death of her mother in 1908, a woman by the name of Anna Jarvis called for a special day which would honor the sacrifices mothers made for their children. This eventually became a permanent day on our calendars in 1914, when President Woodrow Wilson signed a proclamation designating Mother’s Day, held on the second Sunday in May, as a national holiday to honor mothers. Interestingly, the day quickly became commercialized and in 1920, Jarvis denounced the commercialization of the holiday and asked consumers to stop buying cards and flowers. In 1948 Jarvis, who was childless all of her life, had disowned the holiday altogether, and even actively lobbied the government to have the holiday removed from the American calendar.


“All that I am or ever hope to be, I owe to my angel mother.” —Abraham Lincoln

“My mother was the most beautiful woman I ever saw. All I am I owe to my mother. I attribute my success in life to the moral, intellectual and physical education I received from her.” —George Washington

“To describe my mother would be to write about a hurricane in its perfect power. Or the climbing, falling colors of a rainbow.” —Maya Angelou

“A mother’s arms are more comforting than anyone else’s.” —Princess Diana

Hundreds of dewdrops to greet the dawn,
Hundreds of bees in the purple clover,
Hundreds of butterflies on the lawn,
But only one mother the wide world over.
~George Cooper


Happy Mother’s Day to all  the mothers who are here to celebrate, for those who are with us in spirit only and for those that have served as a substitute mother to others in need.  – Premier Health Associates